A New Geological Atlas of England and Wales, on which are delineated by colours, the courses and width of the strata, which occasion the varieties of soil; calculated to elucidate the agriculture of each county, and to show the situation of the best materials for building, making of roads, the construction of canals, and pointing out those places where coal and other valuable materials are likely to be found. By William Smith, Author of the Geological Map of England and Wales. London, J. Cary, 1819-24.

[Title is taken from the advertisement in John Cary’s New Itinerary, 1819.]

Between 1819 and 1824, John Cary published, in six parts, geological maps of 21 English counties. This New Geological Atlas of England and Wales used as its base maps the large county sheets of Cary’s New English Atlas which have been described as “remarkable for their accuracy and their clear, clean print … brilliantly engraved, and rank with the Ordnance Survey as the finest maps of the nineteenth century” (Tooley 1952). Smith could not have had a finer set of topographic maps upon which to draw his geological lines.

The sheets measure 584 mm by 714 mm with the map contained within an engraved and coloured border 480 mm by 530 mm. Each sheet carries, within an oval, shadowed, cartouche the title: A NEW MAP OF [county name], DIVIDED INTO HUNDREDS, EXHIBITING Its Roads, Rivers, Parks, &c. By JOHN CARY Engraver, [year].

External to the engraved border, along the top of each map is the title: GEOLOGICAL MAP OF [county name], by W.SMITH, Mineral Surveyor, and at the bottom: London. Published by J.Cary Engraver & Mapseller and his address, either No.181 Strand or No.86 St. James’s Str.[Cary moved here in 1820 after a fire at 181 Strand] and, usually, a date.

Within the rectangular engraved border, the county is coloured geologically while the parts of adjacent counties remain blank, allowing space for coloured boxes identifying the strata and annotations relating to the geology. On some sheets, such as Sussex, the boxes and their related text overlap the engraved and coloured border.

Unlike Smith’s 1815 map A Delineation of the Strata of England and Wales with part of Scotland, the county maps, apart from Yorkshire, do not contain a stratigraphically-ordered coloured key. Instead, individual strata are identified by name and number with coloured boxes around the county boundary adjacent to their outcrop. The colours used are close to those on the 1815 map and the outcrop shading is the same, with a denser tone marking the base of each stratum. At the base of the map is an explanation that The numbers attached to the description of each Stratum, refer to the Geological Table of British Organized Fossils, which may be had of the Publisher, Price 1s 6d.

Part I cost £1 5s, but the maps were available separately, priced at 5s 6d each.

This New Geological Atlas of England and Wales was never completed, although Cary evidently had three other county geological maps, Lincolnshire, Northamptonshire and Somersetshire, close to publication.  The Lincolnshire and Northamptonshire maps have the geological key boxes, strata names and numbers engraved, but no geological lines, while the Somersetshire map has the geological boundaries engraved but no key boxes, strata names or numbers. These maps were never issued with geological colouring, but were published coloured to show political boundaries. 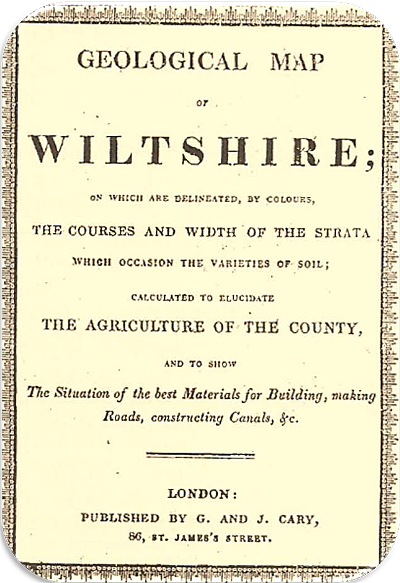 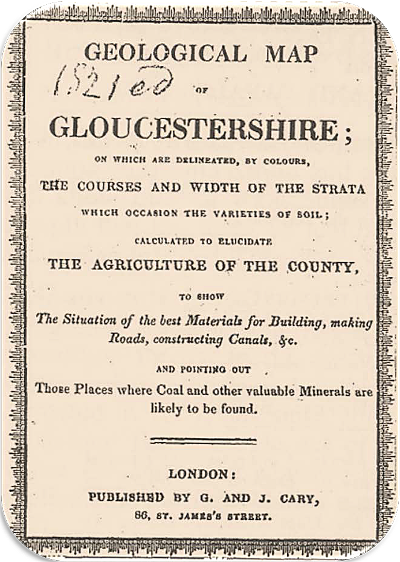 The two different styles of cover for Smith’s County Geological Maps, only one of which points out those places where coal and other valuable minerals are likely to be found